I am not above false equivalencies. I know that the “liberal” in “liberal arts” has nothing to do political liberals as in “Don’t vote for that tax-and-spend liberal”. But it is ironic  that virtually all of the negative comments that  Jeff Selingo’s article about giving engineers a chance to innovate in higher education came from my colleagues in the liberal arts and humanities.  That’s also been my experience with Abelard to Apple reviews and comments on this blog. The general form of the rebuke is

I imagine that conjured images of pocket-protected geeks, possibly wearing glasses that have been recently repaired with white adhesive tape, making decisions in isolation of every true human emotion are supposed to rise from the printed page:

Engineers indeed have experience and skills solving problems, engineering problems, that is. These are the identical, limited skills that can make them exceptionally poor organizational leaders.  “Turn the crank and out will pop the solution” is good engineering but is not leadership.

Academics are deadly serious about this sort of stuff, and it infects decision-making at all levels of a university. It is a meme that pushes search committees away from candidates with technical credentials, for example.  The conversation that takes place out of earshot ends something like this: 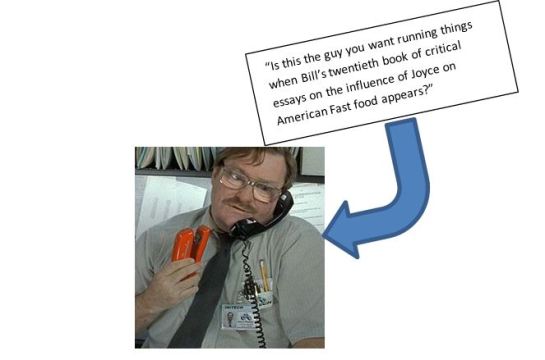 I have to admit that this strategy is efficient .  It lets you separate the good ideas from the bad ideas before even hearing them. What about the pesky counter-examples? “Never mind the success of Silicon Valley.  Engineering leaders and their innovations probably played no role at all.”

There are some on my side of the fence who have a similar reaction to the humanities. I was in a Silicon Valley meeting a few weeks ago when an engineer went nearly apoplectic over the idea that the liberal arts would claim any academic legitimacy: “What do they do that’s useful?” he demanded to know.  “They’re trained circus performers!”

But this kind of reaction is relatively rare — perhaps because so many of us had liberal arts backgrounds before we became engineers. I wish the reverse were true for the humanities and the liberal arts, where it is frequently a badge of honor to proclaim ignorance of technical matters.

Back to my false equivalency. It is not worthy of the  “liberal” in “liberal arts” to pick this kind of fight. It is certainly not worthy of John Kennedy’s famous definition of a “liberal”

Someone who looks ahead and not behind, someone who welcomes new ideas without rigid reactions,

On the other hand, false equivalencies abound on the the other side, too.  Here’s my favorite: “The value of the liberal arts is self-evident and, since we are the only ones who know how to teach this stuff, so is the value of our liberal arts curricula self-evident.”  If you think I’m kidding, you might want to watch Stanley Fish defend exactly that position in the video above.

I can understand a certain amount of  defensive wagon-circling when the conversation veers toward value. Especially when a first-rate liberal arts education costs $200,000. I don’t think it’s a smart fight for the humanities faculty to pick.